What is the meaning of Peng Jin?

The classic “Song of the eight postures” describe Peng Jin as:

“What is the meaning of Peng energy?

Imagine the way a boat bobs on the water, and that will give you a good insight into Peng. 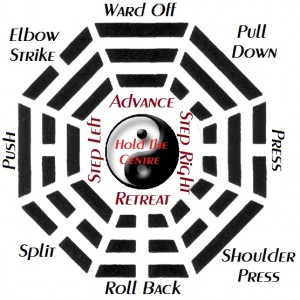 Peng translates as Ward Off and is often thought of as an outward expanding and moving energy that bounces incoming force back as if you were pushing or shoving on a large inflated rubber ball.

The practitioner using Peng energy is very strong and immovable in their stance although not stiff or rigid in any way.

Peng Jin (sometimes simply Peng) is the core skill of taijiquan. All other taijiquan skills are based around the skill. It comes from loosening the body (fang song) and stretching. In essence, ‘stretching but not straightening’ the joints. Peng is not a natural or instinctive skill. It comes from a long period of correct practice. Without a good understanding of peng and then considerable training to transform this understanding into this skill in every part of the body, it will not arise. Peng will not be gained by accident. It is systematically trained into the body over time.

As a quality, energy or jin, Peng is a consequence of achieving a very relaxed and balanced Tai Chi body. Peng is what naturally hold up the structure. As a technique or a movement, there should be no resistance. An offensive attack, a push or strike, happens in the change from another movement, as lü, into peng. You can store movement or energy with lü and release it with peng. Adding this principle for any kind of attack enhances the power released.

So effective training of our peng structure does not depend nor is it developed with weight training for example. And that is why they always say “relax” in Taiji Quan. The peng structure is flexible but is not floppy, nor is it stiff. So, the metaphor of water is used, how water takes different shapes etc. This refers to the flexible quality of peng 掤. Nonetheless, while your physical body will not be like water, all liquid, your movement will be fluid.

Also associated with Peng 掤, is a structural roundedness, that occurs with the letting go tension. For example, in the classics when they speak of “raising the back and sinking the chest”. The back will have a rounded structure, also the knees and elbows are bent.

This Peng 掤 structure enables the coiling in and out of the body, the spiralling motion. One does not need to forcefully show the spirals. When you “sink” let go of tension in the upper body, allowing it to sink and disperse into the ground, there is a downward spiralling motion. And then there is simultaneously and upward reactionary force that rises from the ground and goes up. This supports your structure and is different from your muscles or skeleton structure actively resisting gravity. Both motions spiral down and up through the sinews. And this gives birth to Peng 掤. And in Taiji Quan, the key to practising is developing this structure and maintaining it. It needs to be constant and manifest throughout the whole body.