Should You Develop Speed Or Mass

In this post we will take a look at whether it is better to develop speed in your Kung Fu or Mass IE: more muscle. I have been doing some research on this today so I can show you some hard data and this is what I came up with.

When we look at mathematics, kinetic energy has the biggest impact on delivering a blow, be it a punch, kick, elbow or any other part of the body.

Velocity is the rate of change of the displacement, the difference between the final and initial position of an object. The object being the body part you are using for your blow on your opponent.

When we look at the image above v stands for velocity (speed) and we see that it is squared, which means you get a whole lot more Kinetic energy from speed than you do mass.  Lets take a look at a graph to see the huge difference between Mass and Velocity. 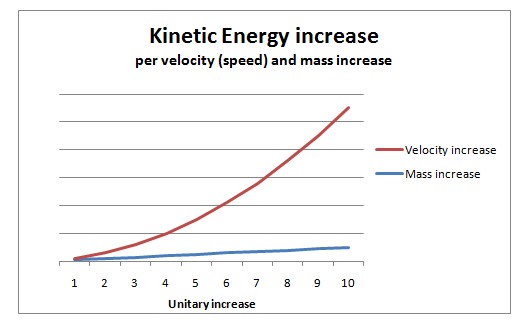 As you can see by increasing velocity (speed) the kinetic energy generated is far superior to mass.

So with that said, you need to develop 2 things in your Kung Fu.

With that said you need to practice your Kung Fu until you are performing it technically sound and then you work on speeding it up.

So in closing be sure to work on the speed of your delivery.